All of our White Papers and Case Studies are subject to the following Terms of Use.

This case study explores how the company benefited from project and programme management during a period of vast growth for the business.

The hydrocarbon reserves in United Kingdom continental shelf (UKCS) waters are a valuable resource. Searching for them and, subsequently, producing oil and gas play an important part in securing the UK’s fuel supply, and maximizing the use of the country’s resources. GDF SUEZ E&P UK, part of the 147,000-strong GDF SUEZ Group, discover and produce hydrocarbons from the UKCS.

In 2012, GDF SUEZ sanctioned the Cygnus project, which will see the development of the sixth largest gas field in the southern North Sea. It is expected to contribute 5% to UK gas production at peak (due 2016) - supplying gas to the equivalent to 1.5 million homes in Britain. The same year, the GDF SUEZ also sanctioned two other smaller projects in the southern North Sea, Juliet and Orca. These projects marked a step change in GDF SUEZ E&P UK who had to transform the Company from an exploration operator to an exploration, development and production operator.

David Lloyd is the Project Portfolio Manager in the Information Services (IS) department at GDF SUEZ E&P UK. This case study explores how the company benefited from project and programme management during a period of vast growth for the business.

In November 2009, the UK was locked in an economic recession. With little sign of recovery, the Bank of England increased its quantitative easing programme by another £25 billion to £200 billion. Ratings agency Fitch piled pressure on the Government by warning that the UK could lose its prized AAA credit rating.

In London, David Lloyd had recently started his new role as project manager in the IS department of GDF SUEZ E&P UK. Despite the economic gloom that was enveloping the UK, GDF SUEZ E&P who had made several gas discoveries in the southern North Sea, was determined to grow and become a leading Exploration & Production operator in the UK. “To achieve the growth ambitions, we knew we needed a resilient, reliable infrastructure,” said David. “We also needed professional data and project management. One of the first things I noticed was that while there was a lot of work going on in the IS department, there were no projects running.”

“People were very busy doing work, such as email migration, but no-one wanted to label that work ‘a project’. I had to generate a portfolio out of what was already happening.”

“Then I was being challenged as to why I, personally, had started so many projects. In fact I hadn’t - they were here already. So one of the first challenges was explaining to the senior management what was going on in terms of specific projects and how they could be managed. It quickly became apparent that we needed a framework.”

There were a number of factors to take into account when devising the framework. Firstly, it had to fit within the parameters of GDF SUEZ group level corporate governance, which are mainly structured for large capital projects, one of the core activities of the group who invests several billion pounds every year on industrial projects. It also had to be delivered in a streamlined way suitable for smaller scale, lower complexity local projects. In addition, like any industry, oil and gas has terminology which its practitioners are familiar with but may seem alien to project managers from other sectors. GDF SUEZ E&P UK saw it as a priority to align as much as possible process and terminology, from the small IT projects through to the large-scale capital projects.

David said: “It was of paramount importance that an executive committee member with an engineering background would be able to understand an IT project manager tasked with delivering them a key component. I believe that if the framework we adopted could achieve this then more time would be spent understanding content and rather than becoming frustrated by technical language.”

The task was clear: take global best practice, industry terminology and meld them together, while respecting the group governance requirements. The result was the Partnership Project Management Framework (PPMF). 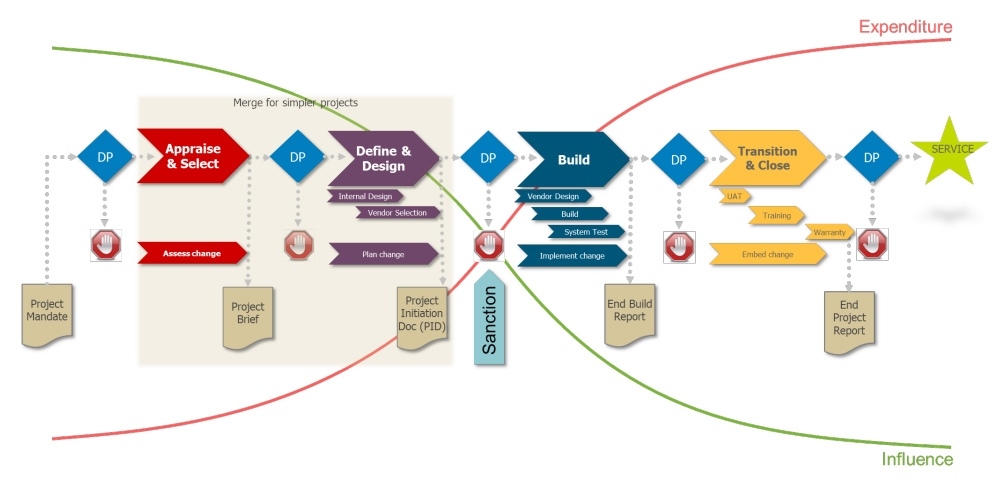 The next challenge was how to introduce the PPMF into the GDF SUEZ E&P UK organization without causing additional disruption to an already fast-expanding eco-system.

“One of the initial problems we faced was telling people ‘this is designed to slow you down’,” said David. “We were told that they were getting on fine without my intervention. So we introduced project management training, coaching people as to the importance of this work.”

“We went out to the business and asked them where they thought they were going wrong. The answer was ‘planning’ - they said they were too busy to plan. So we designed the training course to focus around product- based planning, not just our framework. This has received 100% positive feedback and has really helped people understanding the value of good planning.” Employees who went through the training then benefited from a period of mentoring to guide them through a project.

“That is crucial,” explained David, “It’s not enough to put people through training - you have to encourage them to use the framework. It can take time. Sometimes you have to sit back and let a project manager make their own mistakes and realize that it is because they have not used the framework.”

“It’s a hard lesson to learn, but hopefully it’s an important illustration of why a framework should be used on every occasion. The project may succeed without it, but it becomes clear to everyone that it would have gone much better had the framework been followed.”

GDF SUEZ E&P UK was keen to ensure that training was not limited to those involved in projects within the IS function, but also to all actors across the business.

“It was vital that the teams usually not involved in capital projects grasped the basics of project management to support an efficient company transformation,” said David. “There was some reluctance to learn because people saw this as an ‘IT thing’, when in fact this was relevant across all parts of the business. So we arranged lunch and learn sessions with the support of senior management and we are now looking to introduce exciting and immersive scenario-based training as part of the wider corporate level roll out, to add a real-life element to sessions and gain more active engagement and buy-in.”

With the PPMF in place and training underway, the next task was to demonstrate how it had added value.

“It’s a chicken and egg situation,” said David. “Until someone gets the results from using what you are preaching, they don’t fully appreciate the concept. You’ve just got to keep on trying, have small successes which build up the credibility. It’s important to allow people to find out for themselves how the framework can help them.”

“Top-down buy-in is absolutely everything. If you don’t have really good sponsorship for the framework itself or particular programme or project then it’s going to fail, I absolutely guarantee it. In a company which is growing rapidly through large capital projects, it is difficult to attract the attention of senior managers to sponsor what, for them, seems like a minor project. Again you have to show resilience in the IS Portfolio Management Office or as a project manager within a function.”

Tracking projects allowed GDF SUEZ E&P UK to identify an issue around project initiation - there was not enough resources to match the ambition and consequently, some projects automatically started to slip. Controlling the initiation made it easier to differentiate between projects with a deliberately delayed start and projects with slippage. This allowed the business to have more focused attention on project delivery.

As the benefits of PPMF became clear in the IS function, the number of formal projects across the business started to increase, particularly to support the large changes that were happening in the organization (new teams to be created, new processes and new tools to build and implement, cultural change programmes, etc). Projects soon evolved into programmes and portfolios. Therefore, the framework had to incorporate elements from ITIL®, PRINCE2®, MSP®, MoP®, M_o_R® and P3O® in order to give a seamless approach from strategy through delivery to yield and track the expected benefits. 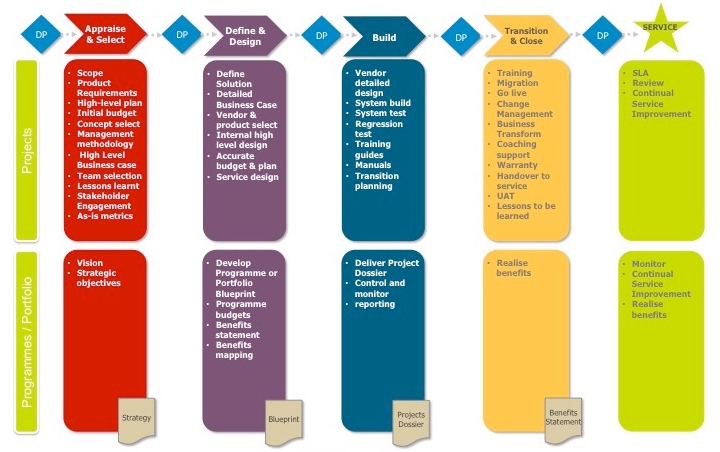 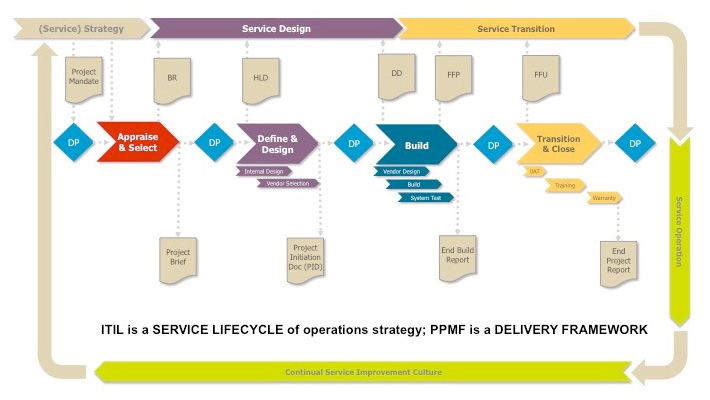 However, there were challenges around how projects were grouped together and how to allocate resource accordingly.

David said: “It can be unclear which programmes a project fits into and you can have projects which need to fit into two programmes. Furthermore, as the programmes became collective, it was increasingly more difficult to layer on another level of governance. We had to be pragmatic, flexible and prepared to move projects around.”

The PPMF has successfully supported the transformation of GDF SUEZ E&P UK and helped all changes so far to happen in a coordinated and efficient way, avoiding multiple reworks, duplications, resources stretches and change fatigue.

The PPMF training has already been rolled out to GDF SUEZ E&P in France and the framework itself across the UK, Norway, France and, in part, Germany. Coaching on project management is also taking place in other countries via the GDF SUEZ University, a group level training academy. GDF SUEZ E&P hopes to complete the implementation of PPMF across the UK and other countries, and demonstrate significant corporate value as the Company continues to grow and expand worldwide. So what has been the most satisfying part of his work at GDF SUEZ?

“PPMF has given people who were not involved in capital projects, the visibility of projects that they did not have before and the confidence that they are now being coordinated and delivered in a strategically linked way,” explained David. “Robust processes have given us the resilience that the company needed. We are confident that we are not making as many mistakes and that the right things are being done, at the right time and in the right way.”

“We are not there yet and I don’t think any company will ever get it perfectly right, but we are well in advance of where we were. The business now has a higher confidence in IT and its capability of delivering business needs against strategy. Without something like this, you could not go from A to B - it would be utter chaos.”

And his advice to anyone starting on the project management journey?

“Cherry-pick what is appropriate for your environment - adopt and adapt. There is no one framework which is a silver bullet. Put the parts together and you have a powerful formula.”

From an AXELOS perspective, this case study demonstrates that:

The support of Jean Claude Perdigues, MD of the company during the deployment; Catherine Brun, CIO of Exploration & Production International during the international roll out and Jerry Bradley CIO of E&P UK is acknowledged and thanked Axelos.