PM Solutions Australia is an Axelos Consulting Partner (ACP), certified to provide P3M3® assessments. They are a leading provider of P3M3 assessments in Australia. PM Solutions has a dedicated Portfolio Practice, which uses Axelos best practices to improve success across delivery-centric organizations in the public, private, and not-for-profit sectors and across a vast range of industries.

“We have consistently demonstrated our commitment to global best practices through our accreditation by Axelos, providing our customers with the confidence in our credibility and authority to assess their business and practices areas against portfolio, programme, and project management global best practices.”
~ From the PM Solutions website1

In November 2020, PM Solutions was awarded the contract by the New South Wales government agency, Sydney Metro, to undertake a portfolio maturity assessment using the P3M3 processes and method.

P3M3 stands for the Portfolio, Programme, and Project Management Maturity Model. The model is a tool for assessing and benchmarking an organization’s current delivery capability and performance. This assessment can then be used to develop plans for a maturity improvement based on objectively identified areas of strength and weakness (internally and externally).

A P3M3 assessment can deliver the following benefits:

P3M3 assessments provide organizations with a basis for transformation. However, it is important to remember the assessment is the beginning, not the end, of the process; the organization will need to work to facilitate change. The P3M3 outcomes provide recommendations for where change will be most beneficial.

Sydney Metro as an organization was formed in 2015 to deliver the $AU 8.3 billion Metro North West Line (known as the North West Rail Link since 2011), which opened on time in May 2019. Sydney Metro is Australia’s biggest public transport programme. The City & Southwest project, an extension of the North West Line, is currently under construction, due to open in 2024, whereupon Sydney will have 31 metro stations and a 66 kilometre standalone metro railway. Separately, the Sydney Metro West and Sydney Metro Western Sydney Airport projects are also now under construction.

These three investments, although referred to as projects at Sydney Metro, are in fact programmes; each one contains many smaller projects. The three programmes are running concurrently and are together worth about AUD $50,000,000,000.

Sydney Metro‘s principal objectives are to plan and deliver safe and reliable metro passenger services in an efficient, effective, and financially responsible way and to facilitate and carry out the orderly and efficient development of land to accommodate the metro infrastructure.

By the end of the decade, the network will be expanded to include 46 new stations and more than 113 kilometres of world-class metro rail for Sydney. This is shown in Figure 2.1.

Examples of the projects associated with a programme for building a new metro line include managing subterranean tunnelling and building new metro stations and essential rail viaducts. Other work, such as for commercial property development, is also needed. Some of these projects are worth billions of Australian dollars each, so they are significant projects in their own rights.

In October 2020, Infrastructure NSW (another Government agency charged with investment assurance across Government) a first-of-kind whole-of-Portfolio Health Check regarding Sydney Metro, making recommendations regarding how Sydney Metro might continue to prepare itself for massive concurrent portfolio delivery efforts in FY22 and beyond. The then Chief Executive of Sydney Metro identified the P3M3 model as the most contextually appropriate model to document current maturity, and guide and prioritize further maturity opportunities and investments. By the end of November 2020, PM Solutions had begun work on the P3M3 assessment. 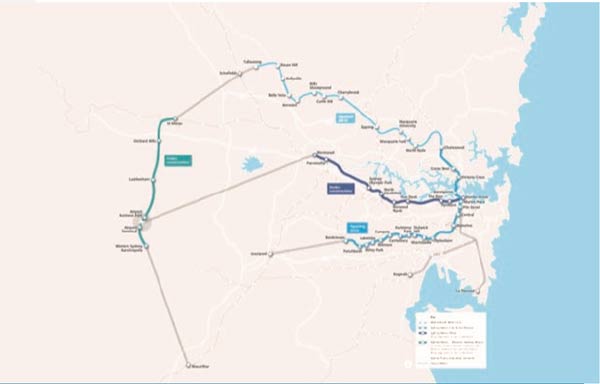 Figure 2.1 The projected development of the Sydney Metro system

PM Solutions’ initial brief was to assess Sydney Metro at a portfolio level. However, after further discussions, this brief was expanded to include all three P3M3 models and assessments for the three Sydney Metro programmes and all their projects. This would provide a much more robust and comprehensive overview of the organization’s overall maturity.

“We set out to provide a totally objective and unbiased professional assessment of their current capability to deliver their portfolio of programmes and projects”.
~ David Preller, Lead Maturity Assessor at PM Solutions

Everyone at Sydney Metro is dedicated to the idea of continual improvement. It is particularly important that, when managing public service programmes that use such large amounts of taxpayer money, organizations make every effort to work to the absolute best of their abilities.

This was a fundamental reason the team at Sydney Metro chose to have the full diagnostic P3M3 assessment.

“The documentation review was enlightening. We prepared a list of all the types of documents we wanted to see. Sydney Metro provided us with most of those documents. If an organization can provide everything you want, that’s good information, but it’s always important to note which documents they can’t show you – recognizing of course commercial and Cabinet sensitivities.”
~ David Preller

In the early stages of the assessment, the PM Solutions team interviewed the majority of Sydney Metro’s executive leadership, from the then CEO down to every functional lead within the organization. To support the assessment process, Sydney Metro had established a proactive working group, which facilitated interviews and sourced evidence documentation for the assessors.

The interview process is the heart of the P3M3 assessment. Without open and honest communication in the interviews, the assessment team cannot correctly assess the organization’s true maturity. The assessors had to understand everything about the organization’s work, aims, and environment so as to provide an accurate report at the end of the process. The report had to reflect accurate, useable, and relevant recommendations for improvement.

The PM Solutions team conducted a significant number of interviews at Sydney Metro. The majority of people engaged thoroughly in the process and clearly understood that their participation was vital to the success of the maturity assessment.

A roadmap to improvements

The roadmap that PM Solutions provided had three distinct phases. The first phase encompassed the most critical tasks. Sydney Metro engaged enthusiastically and immediately in the process. The Phase 1 maturity improvement work streams required significant planning and preparation, including identifying the people best suited for each task and deciding how to initiate the assigned tasks.

Generally, recommendations for improvement aim to help organizations reach the next level of maturity in those areas that the P3M3 assessment has identified as being ‘immature’. The Sydney Metro P3M3 assessment report showed that there were noticeably clear areas of strength and excellence, including the critical area of governance. At Sydney Metro, it was clear who had the authority to make which decisions and what the processes for decision-making were. The organization was also particularly strong in the area of risk management.

Stakeholder management was another area of strength. For example, the City & Southwest metro line will run through Central Station in Sydney. Because the line runs so deep through an area that has been central to the city for so long, the teams digging the tunnels encountered many important and culturally sensitive burial sites. The remains were required to be exhumed and delicately relocated so as to allow construction to progress. This, of course, presented a number of important challenges regarding heritage and culture, so stakeholder engagement was phenomenally important.

Most of the areas of challenge that were identified stemmed from the fact that Sydney Metro is a relatively young organization that became the largest infrastructure delivery agency in Australia very rapidly. There were pockets of excellence throughout the different business areas and delivery teams, so one of the roadmap’s key points was to encourage everyone in the organization to work holistically, better utilizing existing centres of excellence.

Over the course of the maturity assessment, it became clear that there were many activities and projects being undertaken in various parts of the organization that other teams did not fully appreciate, resulting in duplication of effort in some instances. While this was hardly unexpected, the maturity assessment report provided a truly clear snapshot of all the activity within the Sydney Metro organization, including who was doing what, which meant that those activities could begin to be consolidated.

Like many organizations in 2020, Sydney Metro was challenged with adapting to virtual and remote working conditions. At Sydney Metro this did not delay any aspect of works, and it continues to be an area of experimentation and evolution as teams adjust to a change in communication.

Other challenges faced by Sydney Metro included a national skills shortage, where there was an absence of suitable candidates for a number of essential technical roles. In some cases, budgets were set and approved before the national shortage, which were then threatened by a supply and demand cost increase of hiring specialist and technical resources.

At the time of writing, Sydney Metro continues to deliver the three Metro programmes. PM Solutions has been further engaged to guide and support the Sydney Metro team through the initiatives laid out in the maturity improvement roadmap, using their industry knowledge and prior experience to help the organization enact change and achieve tangible delivery maturity improvement.

“Sydney Metro leadership and teams are committed to the findings from the P3M3 assessment report and the subsequent maturity roadmap. A number of initiatives are well underway: we are putting teams together and defining what has to be done to achieve the Phase 1 tasks so that we can improve the organization’s maturity as soon as is practical.”
~ David Preller

“It is very refreshing to see the dedication and commitment to the P3M3 assessment process and a true desire to rapidly improve delivery maturity. We are confident that Sydney Metro will improve its portfolio, programme, and project maturity in a shorter-than-expected timeframe.”
- Mark Porter, CEO of PM Solutions

“The structure and methodology of the assessment, and the way in which PM Solutions approached it, was extremely constructive. There were few complete surprises from the assessment itself, but the way in which issues and process gaps were unpacked and shown to be interrelated helped us to better understand how maturity improvements could build upon one another. The real value of the P3M3 model, as bought to life by PM Solutions, was that together we were able to sequence and prioritise relevant improvement efforts to gain immediate and tangible benefits, which then built the necessary momentum and support needed to tackle some of the more challenging findings”.
- Josh Watkin, Deputy Executive Director – PMO, Projects Division, Sydney Metro

Reuse of any content in this case study is permitted solely in accordance with the permission terms at https://www.axelos. com/policies/legal/permitted-use-of-white-papers-and-case-studies.

A copy of these terms can be provided on application to Axelos at Licensing@Axelos.com.

Our Case Study series should not be taken as constituting advice of any sort and no liability is accepted for any loss resulting from use of or reliance on its content. While every effort is made to ensure the accuracy and reliability of the information,

Axelos cannot accept responsibility for errors, omissions or inaccuracies. Content, diagrams, logos, and jackets are correct at time of going to press but may be subject to change without notice.

Sourced and published on www.Axelos.com.