Use of PRINCE2® by Scheidt & Bachmann GmbH

All of our White Papers and Case Studies are subject to the following Terms of Use.

The case study is also available in German (PDF, 1.6MB).

Scheidt & Bachmann GmbH describes how PRINCE2® helped them deliver a project to develop new hardware and software to install 64 ticket vending machines for the rail company Bayerische Oberlandbahn. Among the benefits of using PRINCE2 they found that applying PRINCE2 principles and processes increased common understanding and simplified decision-making where differing priorities were involved. The use of PRINCE2 improved delivery and customer satisfaction in a project that, from the start, had challenging and immoveable deadline dates while introducing technical innovation.

Scheidt & Bachmann was established in 1872 and remains a family-owned company under Dr.-Ing. Norbert Miller, fifth generation of the founding family. With 24 subsidiaries, and more than 2,600 employees worldwide, Scheidt & Bachmann’s continuous growth and innovation is a testament to the stability of the firm throughout the years. Initially a mechanical engineering company, the organization has developed to become a global solutions provider.

The fare collection systems division was created in 1978 and is a global leader in fare collection technology. It is a highly skilled organization, backed by a state-of-the-art product range and technological innovation, allowing the company to deliver reliable and effective solutions to meet its clients’ specific needs.

Bayerische Oberlandbahn is a modern, forward-thinking, customer friendly rail operator and part of the Transdev group, formerly known in Germany, as Veolia Verkehr. The railway division of Transdev provides regional transport services throughout Germany making 40.3 million train kilometres available in 2013. The operational centre for the railway companies in Schleswig-Holstein, Saxony-Anhalt, Saxony and Bavaria is located in Görlitz.

The ‘Meridian’ railway, which opened in December 2013, operates on routes between Munich and Salzburg Rosenheim / Kufstein in South Germany and Austria. Meridian wished to provide state-of-the-art ticketing; offering added value to their customers, including a new generation of Ticket Vending Machines (TVMs).

What was the project?

Bayerische Oberlandbahn wanted to create an advantage over their competitors, attract customers, and provide demonstrable added value for passengers. They chose Scheidt & Bachmann as a key supplier for the fare collection system because of our capability to produce a device tailored to their specific requirements in a challenging timescale.

New rail lines were to be operated by Bayerische Oberlandbahn and would open to the public in December 2013.

Scheidt & Bachmann received an order in March 2013 to supply and install new TVMs for the Meridian railway by 14 December 2013, the non-negotiable date for new stations to be operational. This posed a challenge to deliver a customer-specific new generation of TVM in time. The project required new design work and the production of a prototype device for customer approval, as well as significant software development.

The project needed to deliver a solution which:

It was necessary to build productive and cooperative relationships with the third party suppliers providing real time train information and tariffs in order to produce an effective specification and to carry out integrated acceptance testing. Suppliers also needed to be sourced for the new glass front for the main display and the addition of a second display for the new generation TVM. 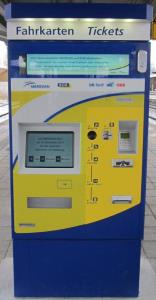 It was clear from the start that the main driver was delivery to acceptable quality to the fixed deadline for the opening of the new lines.

Scheidt & Bachmann saw this project as an opportunity to design a new standard TVM (model FareGo Sales ST|40) which could be offered to other customers. It was also important to demonstrate our capability to deliver a working solution to time, delighting the customer.

In the short term, the objective was to run a successful project and maintain customer satisfaction. The long term objective for Scheidt & Bachmann was to achieve additional sales of FareGo Sales ST|40, using Bayerische Oberlandbahn as a reference site.

Both short and long term objectives have been achieved: subsequent new contracts and projects have been won in the difficult and highly competitive German TVM market as a result of our ability to deliver to Bayerische Oberlandbahn.

At the start of the project the project manager undertook product based planning involving all teams who would contribute (design, production, development and quality assurance) to identify what outputs were needed to achieve the final deliverables. The project was subsequently split into 11 stages. 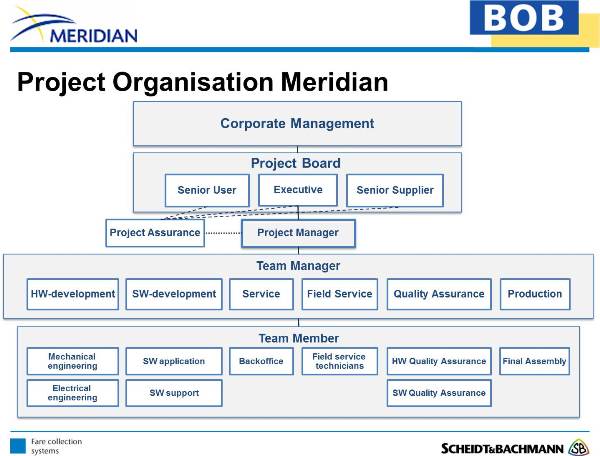 See Figure 3.1 for the timeframe for the project stages. The project milestones were:

Increasing the number and the complexity of projects posed significant challenges for the project managers. The company chose PRINCE2 as it provides a standardized guidance and process framework. It was also evident that following PRINCE2 would encourage a controlled environment with clear responsibilities, focus on controllable stages, coherent standards, and a homogeneous project language.

After completion of the development project for the integration of the method, the Scheidt & Bachmann internal Centre of Excellence (CoE) was set up to take over from our specialist consultancy, Copargo. The CoE was appointed to provide specific support, to monitor the performance, to set standards and to institute continuous improvements.

It was decided to manage the Bayerische Oberlandbahn project according to PRINCE2 with management by stages and utilizing standard documentation which is well established internally. Some of the project specific PRINCE2 adaptations included:

Because a clear and comprehensive specification was signed off during the first delivery stage, only one significant change was identified, which was agreed through the change control process.

Clearly defined acceptance criteria were included in work packages so the team managers/members were clear on what the end result needed to be. Test scripts were agreed for development testing as well as QA testing with established feedback reporting. These were also used for software acceptance testing with the customer.

Hardware acceptance testing was performed on a prototype TVM.

Within our project schedule, several ‘Super Milestones’ were identified, which recognized significant goals to indicate progress towards the final deliverables. These included bill of materials handover to production, hardware and software acceptance testing, delivery of TVMs, and installation acceptance.

Monthly reporting kept focus on milestone achievement, budget versus actual spend and customer satisfaction. Our standard reporting gave specific measurements for Red/Amber/Green (RAG) assessment and any item categorized as red required a separate issue report to be issued to the board.

To ensure adherence to the PRINCE2 processes, the project published measurements that showed availability and currency of key products. This was auditable by Project Assurance.

2.9 Challenges faced during the project

Software development was carried out in Slovakia, but managed from Germany. This required on-site visits, many telephone conferences and weekly progress reports to the project manager (PM).

Having sourced a supplier for the glass front for the TVM, there was a production failure at the prototype stage which took time to resolve; we communicated with the supplier to understand technical challenges and timescales. The project manager was able to alert the project board to a potential delay and having such senior people involved meant that Scheidt & Bachmann were able to adjust our production schedule to allow more time for the glass fronts delivery. We also reserved a second installation team and sanctioned additional cost to work overtime in production so we could still meet the desired go live date. As part of the risk management, we also identified a fall back position to have a steel front installed, and instituted a daily delivery report which we shared with the customer to track production of hardware. It included a daily review of risk and a go/no-go on the fall back plan. This ensured that the customer and internal board were kept abreast of the issue and that focus was maintained throughout the organization.

Lessons learned were recorded throughout the project and 33 were documented with recommendations for future projects to avoid or reproduce. Here are some examples:

3.1 What contributed to this being a successful project

The initiation phase allowed everyone involved in the project to plan what was needed, and to understand priorities, scope, time schedule and milestones. The product initiation documentation (PID) was available in a shared location and was invaluable in keeping the project on track when questions were raised regarding priorities.

A communication strategy that stipulated monthly reporting was important for keeping the whole team informed and involved, even when their part had not yet started or had been completed.

Formalizing work packages and ensuring that they were agreed with the team managers (for content, effort and delivery timing) ensured that teams understood exactly what was needed, when and how it would be judged.

Maintaining a risk register and reviewing it with the team ensured that potential hazards were identified as early as possible, and not forgotten. Where appropriate to the level of risk and impact, actions were clearly allocated and followed up on.

We used configuration management and created configuration item records specifically for documents requiring formal approval. This proved vital to see instantly whether a particular specification had been produced, reviewed and approved, as well as who was responsible for it. It allowed the PM to monitor this critical phase of the project very easily and helped to ensure that the key milestone of specification agreement was reached in the extremely challenging timescale needed.

A project scorecard, providing a simple snapshot, was designed to maintain corporate level interest. This one page update used RAG indicators combined with a short narrative to inform the corporate board of progress.

Maintenance of a formal issue register simplified prioritization and ascribed clear responsibilities for actions with expected time-frames. This register along with all other project documentation was centrally available and accessible to all internally. Splitting the work into clearly defined stages, (see Figure 3.1) with good understanding on all sides of what was being produced, meant that it was easier for us and our customer to confirm that we were on target to deliver, or to identify work streams that were starting to slip. 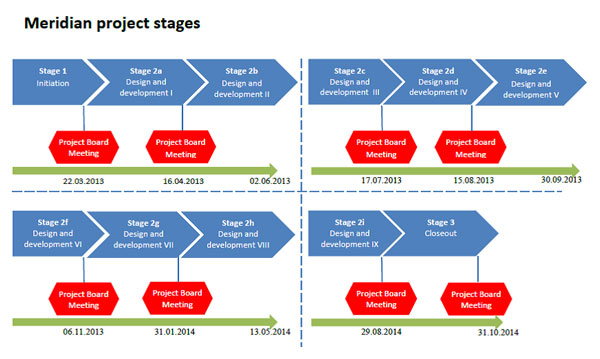 3.2 Benefits from this PRINCE2 project for Scheidt & Bachmann

Within Scheidt & Bachmann the project has set a good example for other projects with the
demonstrated benefits from establishing:

Other benefits for Scheidt & Bachmann have been: 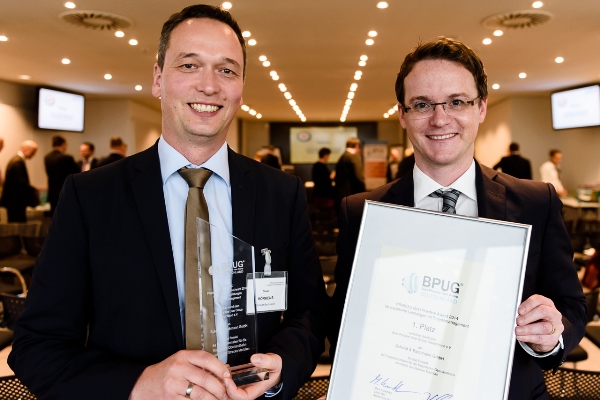 3.3 Benefits for the customer

For Bayerische Oberlandbahn, the benefits have included:

As a consequence of this project it is anticipated that the German market for ticket vending machines will be further opened up to Scheidt & Bachmann as more people hear about our successful project with Bayerische Oberlandbahn. This may lead to opportunities to generate service revenue from an extended client base.

3.5 What lessons would you pass on to others?

From this project we learnt some important lessons that are applicable to all projects:

The project was very successful and delivered TVMs that were installed:

Our customer feels that they can trust us because we communicated problems openly, managed risk well, and were flexible in responses. Although they initially were disappointed in the suggestion to split the scope, they accepted the principle of de-risking the prime deliverable of selling tickets on opening day, and with hindsight have confirmed that it was the appropriate action. They have declared the project a success.

Jürgen Kindler, project manager for Bayerische Oberlandbahn, said: “Due to Scheidt & Bachmann’s effort and determination we were able to complete the project successfully within the time-frame. Problems were communicated openly and solved quickly, which has greatly contributed to its success.”

Daniel Weber, Head of Technical Project Management at Scheidt & Bachmann, adds “I am especially delighted with the team that implemented the project successfully to meet the customer’s satisfaction.”