Toyota Kata and IT White Paper

We may have good ideas and get good results from a pilot, but that does not guarantee overall success. Ideas and methods are not enough: we have to work to bring them to life. That is what Toyota Kata is about.

Over years, Toyota built habits of scientific thinking in their employees. This was explained over fifty years ago in the original pamphlets for the Toyota Production System. Later, Toyota adopted W. Edwards Deming’s concepts, which became Plan-Do-Check-Act (PDCA). PDCA appears in most Toyota methods of improvement. At its heart, PDCA is an approach to iterative learning; plan, run experiments, and learn your way through uncertain territory.

PDCA and scientific thinking are powerful ideas, but people do not always use them. Our default is not a deliberate, scientific process of problem comprehension, planning, testing, and reflection. Rather, as Daniel Kahneman observes in Thinking, Fast and Slow, our default is fast thinking: making assumptions based on biases, a desire for security, and past experiences1.

There are over one hundred types of biases documented in various experiments. One example is the availability heuristic: we tend to explain events based on the information that is immediately available. We generally prefer “simple-looking options and complete information over complex, ambiguous options2.” We “are drawn to details that confirm our existing beliefs.” These are examples of Kahneman’s broader concept of automatic, unconscious fast thinking, which he calls ‘System 1’ thinking.

So, we dislike uncertainty and prefer solutions that have worked before, rather than unfamiliar ideas. Additionally, the Dunning-Kruger effect demonstrates that the less we know about something the more we overestimate our own knowledge and capability3. The problem, then, is not designing better systems but changing the ways in which people think to enable the achievement of challenging goals.

These are the issues Mike Rother uncovered in his research on Toyota’s management system and that he wrote about in his seminal book, Toyota Kata4. Rother’s research identified how Toyota’s managers develop scientific thinking in other employees.

Good examples of people changing their ways of thinking to master complex skills come from sports. Martial arts students, when taught by an expert, can drastically improve their capabilities. The knowledge- transfer model in this example is the master-apprentice relationship; these relationships often utilize Kata as a starting point. A Kata is a structured routine which the master has their apprentice practice to make up fundamental skills. Rother saw that Toyota has employees practice Kata to internalize the fundamentals of scientific thinking and to generate organizational capability. Toyota had people practice fundamental scientific-thinking patterns, aiming for habituation.

Rother observed that many experienced managers had learned to think scientifically and had developed a lot of tacit knowledge. Managers believed they each had a unique approach, but their approaches followed a common pattern. Rother wanted to spread this pattern into other organizations, making tacit knowledge explicit, intuitive, and simple. Toyota Kata was the result of this aim.

Toyota Kata introduces the Improvement Kata and the Coaching Kata: two routines that make Toyota’s patterns teachable. The Improvement Kata is a model with four steps, and Rother developed practice routines for each step, which he called Starter Kata. These are ideally practiced daily in short bursts.

2.1 A SCIENTIFIC-THINKING MODEL AND STARTER KATA

The Improvement Kata mirrors the practical, everyday scientific thinking Rother observed at Toyota, emphasizing iterative learning. The associated Starter Kata practice routines for each step of the model help to normalize this pattern of thinking. 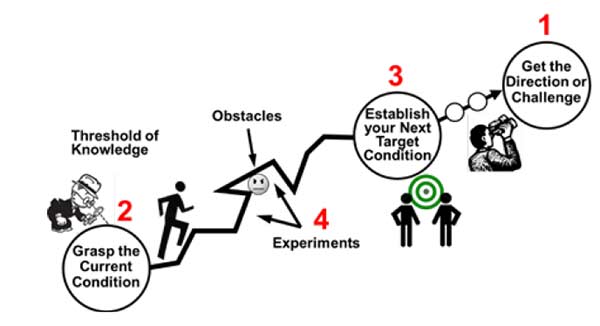 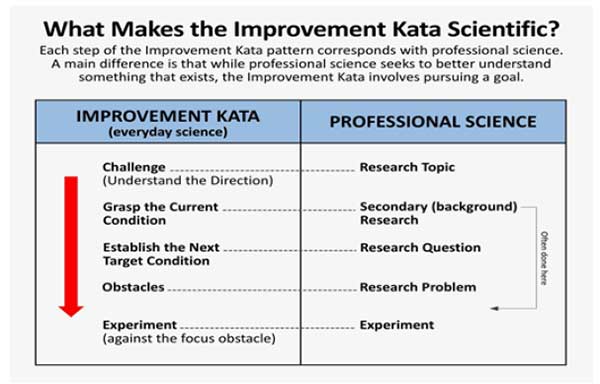 Many insights are embedded in the Improvement Kata, including:

When using the Improvement Kata, common mistakes include:

Our mistakes revolve around fast thinking. Scientific thinking (slow thinking) uses the ambiguity beyond our knowledge threshold to maximize learning. The point of Toyota Kata is to practice scientific-thinking fundamentals so they become ingrained and help to counter the natural human tendency towards fast thinking.

To practice a new pattern, most people need a coach. The coach’s role is to keep the student focused on practicing the Starter Kata correctly and not allowing them to return to old habits. This means asking questions and giving corrective feedback on deviations from a Starter Kata pattern. Rother developed a two-sided Coaching Kata card (a Starter Kata) with the basic headings for daily 20-minute coaching cycles (another Starter Kata), which help anyone get started with coaching. 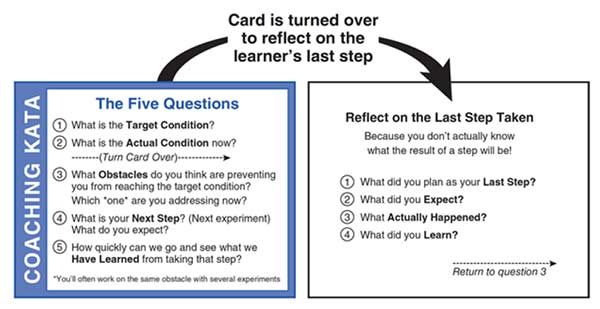 Toyota Kata and IT

Given the complexity of software and digitally-enabled processes, Toyota Kata is particularly relevant in enabling adaptive, learning organizations.

An organization, Menlo Innovations, is well known because of their focus on creating great experiences for software developers and users. Menlo’s development process was not designed after Toyota Kata, but uses a version of Agile development that closely resembles the framework of the Improvement Kata.

Menlo’s model starts with deeply understanding users and how they currently work in order to develop a vision for the software. Menlo Innovation’s ‘technical anthropologists’ study users in their natural environments and identify a persona of the primary user, who then becomes the main focus for software development. The technical anthropologists then develop a vision for the software and utlimately produce storycards that describe each of the key features by computer screen.

Next, every feature of the envisioned service offering is prioritized by the customer. Each week, the customer plans which features they want developers to work on in the next five-day cycle. These features are similar to Target Conditions and the developers seek to achieve them experimenting with computer code. Menlo receives daily feedback from their quality advocates and weekly customer feedback. In the weekly sessions, customers review what has been done, then decide which storycards they will play for the following week (like the next set of Target Conditions for the following week). The result is iterative learning and a smooth workflow over the life of the product. Menlo almost always finishes projects on time, on budget, and with zero customer complaints.

Mike Rother studied the patterns of working at Toyota and found that they practice widespread, habitual scientific thinking that had been nurtured and encouraged in every employee for years. Rother distilled the core tenets of the practices he saw at Toyota and created the Improvement Kata and coaching kata, which are designed to habituate the principles of scientific thinking in people of all disciplines and positions, enabling iterative, proactive improvement in an unlimited range of domains.

To learn more about practicing Toyota Kata for scientific thinking, read the Toyota Kata Practice Guide8. For more on service excellence and Kata, try The Toyota Way to Service Excellence9. The next step is to experience the power of scientific thinking by practicing it yourself. Remember, amateurs practice until they get it right; professionals practice until they cannot get it wrong.

Jeffrey Liker is a professor emeritus of industrial and operations engineering at the University of Michigan and President of Liker Lean Advisors, LLC. Liker has published 15 books including the best selling The Toyota Way.