Head of IT at FES Frankfurter Entsorgungs- und Service GmbH

Leading waste disposal and cleaning provider FES GmbH recognized the need to optimize processes and align them with new technologies, so created a new project to professionalize all of its project management and project portfolio management. The project was successfully run using PRINCE2®, and completed in only eight months.

FES Frankfurter Entsorgungs- und Service GmbH (FES GmbH) was established in 1996 from the City of Frankfurt’s Office of Waste Management and City Cleaning. Since then it has developed into the leading full-service provider for waste disposal and cleaning in the Rhine-Main region.

Together with six subsidiaries and associated companies, the group has around 1,700 employees. The group offers a complete package of services related to the disposal and cleaning services in accordance with the legal provisions of the Recycling and Waste Management Act and the Commercial Waste Ordinance. In addition, the energy generated through the incineration of waste in the company-owned plant is converted into electricity and heating.

The company is a joint venture between public and private sectors: the Frankfurt am Main council which owns 51% of the share and REMONDIS AG & Co. KG, which owns 49%. For more information about FES GmbH visit https://www.fes-frankfurt.de/

1.2 Summary of the project and its outcomes

FES GmbH created a project, “Establishment of a Project Management Office” (PMO) (Etablierung eines Projektmanagement Offices [PMO]) to professionalize all of its project management and project portfolio management. The project was successfully run using PRINCE2®, and completed in only eight months.

The most important outcomes from the project:

The project helped create the right organizational conditions to make these outcomes possible.

FES GmbH recognized that they had problems in delivering projects individually and as component parts of their overall project portfolio. The underlying problems were identified as:

2.2 What inspired or drove the work/project?

FES GmbH recognized the need to optimize processes, work organization and work cycles, and to align them with new technologies. What we had was the technical qualifications and skills of our colleagues. But what was missing were defined standards and communication across departments.

2.3 What were the drivers for change?

There were very clear indicators that the existing way of managing projects needed improvement. The IT department was overloaded with work and had a backlog of pending tasks. Projects were being dealt with on request without any real prioritization based on organizational strategy. The company management did not have an overview of the current projects and their status.

A project organization was created to ensure board level commitment and to bring in outside expertise, see Table 2.1.

The project was set up to deliver three specific outputs that were designed to address the identified problems:

3.2 What benefits was the organization trying to realize?

The justification for the project was based on these outputs enabling the delivery of benefits that would make the company more effective in delivering projects relevant to its strategic goals.

The expected benefits were:

Initially we were not given any specifications from the managers. These have been established during the setting up phase.

At the beginning of the project we organized two introductory workshops which were moderated by an external consultant. During these workshops the project team and the management of FES GmbH jointly defined the goals and purposes of the project. The workshops were followed by a planning workshop with the project team. We decided to follow a product based planning methodology, as suggested by PRINCE2. At this stage we defined a set of project products and the links and dependencies between them. From this we derived the project plan that was then divided into different phases. 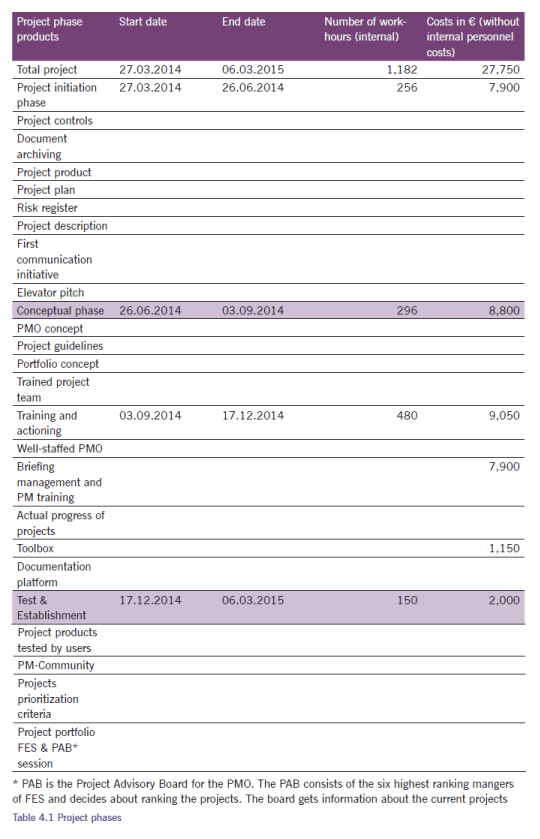 * PAB is the Project Advisory Board for the PMO. The PAB consists of the six highest ranking mangers of FES and decides about ranking the projects.
The board gets information about the current projects Table 4.1 Project phases

We chose PRINCE2 for the project because we already had some PRINCE2 expertise and had consulted other companies in Frankfurt who recommended it to us.

The method was adapted to the company needs and to the project specifications, and was significantly simplified by avoiding documentation that was not needed by the project. We had already implemented a tailored version of PRINCE2 and wanted this project to deliver an adaptation that could be widely used for future project work in the company.

4.3.2 Project plan, including costs planning, based on product based planning

Monitoring of the project was done through a simple Excel spreadsheet in which we recorded what was planned and the actual status. This way everyone in the team had an overview of the planned and actual phases, the products and the resulting time, cost and resource plan.

During the full project we always kept an eye on the risks and found risk assessment easy to do. We ran numerous workshops with the internal stakeholders (project managers) during which the results were subjected to critical examination. In this way everybody’s requirements were considered and any required fine-tuning was carried out.

4.3.4 Acquisition and monitoring of open issues in the issue register

We documented all open issues in a shared Excel list. Every member of the project could add issues to the list which would then be discussed during the team meetings. Urgent issues were escalated to the management team. The list of open issues allowed an active control of changes in the project.

It was agreed with the steering committee that the project members would be available for at least one day a week to work on the project. The project team met every Friday in a room that was available to the team for the full duration of the project. During the weekly meeting we would discuss what everybody was working on as well as the open issues and problems.

A short written status report was given to the steering committee once a month to show the actual status of the project.

At the end of the project the full results were collected in a project completion report. A benefit review plan was prepared in which we defined how and when we could evaluate if the expected benefits from the project were realized. The first benefit review was done 3 months after project completion and the second one after six months. These results were then made available to the steering committee.

We were worried that the processes defined during the project would not be followed. Actually this did not happen and everybody complied with the processes, as we explain in the details of the benefits section. The biggest challenge in the project was to inspire the employees concerned about the changes in the project management approach.

5.2 What was the biggest success factor?

A major contribution to the success of the project was the strong belief within the team that the changes introduced in the project were urgently needed. This gave the whole project team a strong commitment to the new way of working.

5.3 Who has benefited from the project?

Three groups of people have directly benefited from the project:

The project has set up a strong framework for making project portfolio management in FES GmbH much more effective. It has created:

As a result of putting these elements in place, FES GmbH has already seen improvements in the way it manages its projects. Notably, the following benefits are being realized:

The experience of running the project provided some additional benefits to the company’s project portfolio management in the form of the lessons captured at the end. These can be taken forward for future projects to learn from:

The project has delivered the outputs as planned and the company is already realizing the benefits but we are looking for continued improvement. Areas to address are:

The FES GmbH experience in adapting PRINCE2 for its project management approach and as the means to building its PMO highlights the strength and flexibility of the method. The study has shown the benefits of introducing PRINCE2 principles and processes to a team who were already well- motivated and technically highly competent in their work. It has given FES GmbH the ability to get better information to improve their project portfolio prioritization and delivery.

Jochen Schmitz is the Head of IT at FES Frankfurter Entsorgungs- und Service GmbH. He has many years’ experience of project management and running a PMO, and is qualified in PRINCE2, Six Sigma and change management.

Katharina Gossen was Head of PMO at FES Frankfurter Entsorgungs- und Service GmbH. Together with her graduation as a Master of Science in Business Administration and Engineering she has collected many years’ experience of project management and establishing and running a PMO. She is now sharing her experiences as a PMO Consultant for BridgingIT Consulting, Frankfurt, with new customers. She is qualified in PRINCE2 and agile project management.